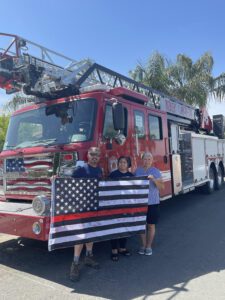 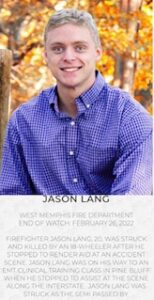 Ernie Young was nice enough to stop by  a Delano house this week to have them sign the American flag of a fallen Tennessee firefighter because Desiree wouldn’t be able to make it to Porterville so he stopped by their house in Delano.

West Memphis Tennessee firefighter Jason Lang lost his life in the line of duty on Feb. 26 of this year. He was a struck and killed by the driver of a big rig after he stopped to render aid at an accident site. Lang was heading to an emergency medical technician training class in nearby Pine Bluff when he stopped to help.
In February 2020, Delano’s Ray Figueroa, a captain for Porterville Fire Department, was one of two Porterville firefighters killed in a deadly downtown arson library fire. Also killed in the blaze was Porterville firefighter Patrick Jones. Figueroa, 35, left behind two young children, his parents, siblings and nieces and nephews.

Figueroa grew up in Delano, graduated from Delano High School and worked for the city of Porterville Fire Department for the past 13 years.

Young went by Figueroa’s parent’s house to have her and hia daughter Desiree sign it. Ernie Young is from Colorado and is with Truck for the Fallen.
He will take the flag through out the state to different fire departments to have them sign until it is full on both side and then will be delivered to the Family of Jason Lang in hopes to ease a little pain for their lost as he did to our family.
On Thursday, Ernie will be in Porterville where my Cousin Ray Figueroa and Patrick Jones were stationed to have those firemen sign the flag.
Ray’s and Patrick’s Dad and other family members will be there to sign the flag.