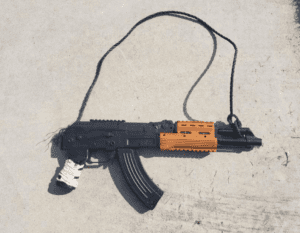 Robert Nevarez, Chief of Police, said on Oct. 21 at 11:09 a.m., the agency received an anonymous call of a man, later identified as Rodrigo Lopez Pina, carrying a firearm similar to an AK-47 walking north in the 200 block of Asti Street.

Officers responded and were able to quickly find the man holding what was later determined to be a replica AK-47 with the orange tip removed and other modifications making it look very realistic.

Officers established communication with Pina and convinced him to drop the gun. He was then taken into custody. The investigation revealed that he was under the influence of a controlled substance and was also in possession of drug paraphernalia.

This is another great example of officers showing great restraint,” the chief said.

“We would like to thank the anonymous citizen for this tip,” Nevarez said. “Thanks to this, we were able to take him into custody while using minimal force.“