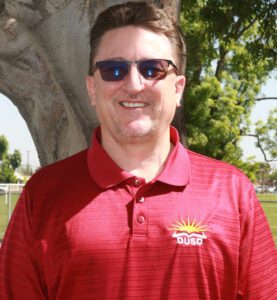 A Delano Union School District educator and administrator has received a state award for outstanding leadership and significant contributions in the areas of health, physical education, and recreation.

Director of Physical Education and After School Programs Kenneth Dyar was honored by the California Association for Health, Physical Education, Recreation and Dance (CAHPERD) with the 2022 Clark Hetherington Honor Award during the association’s 2022 CAHPERD Conference held March 3-5.

“You are to be commended for your commitment and dedication to promoting health lifestyles through leadership and collaboration in the education community,” CAHPERD president William Potter stated in Dyar’s acceptance letter.

The award was named for Hetherington, who was a physical education administrator at the university, state and national level in the 1900s through 1920s. He was the first Superintendent of Physical Education with the California Department of Education from 1917 to 1921 who approached physical education through natural activity and wholesome living.

Dyar, who has been a member of CAHPERD in 1987, said the award was “humbling.” He states that the organization has a spirit of support for all members.

“The award means the world to me,” he said. “It is very meaningful.”

Dyar has high expectations for all of Delano’s students in all aspects of their lives, not just academically. He grew up in Delano, giving him a common background with DUSD students. He teaches, leads and works in his home community.

“The health and success of Delano’s youth are the prizes that drive me,” he said in his application for the award.

Dyar’s advocacy for physical education expanded when he was named 2006 California Teacher of the Year. His message has traveled throughout the state and nationally to five other states, which are included in more than 200 workshops on physical education, wellness, mindfulness, and movement in the classroom.

Dyar stated that while other districts have cut or reduced physical education instruction, DUSD has expanded PE, and is committed to a “PE4All” philosophy. The district employs six elementary school PE specialists (after a more-than 40-year absence), along with PE staff at the district’s middle schools. All four middle schools have gyms and fitness rooms. The district has also created and staffed a district-level department to provide leadership and guidance in physical education instruction.

“I am grateful to Delano Union School District for the program that has been built for Delano’s students,” Dyar said. “I love the environment in which I work.”