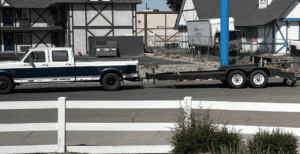 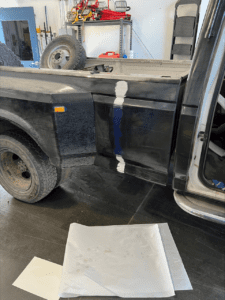 Tulare County Sheriff’s investigators worked with their Kern and Madera county counterparts to arrest a Lamont man and recover stolen pickup, excavator and trailer during a monthlong investigation.

On April 12, Tulare County Sheriff’s deputies were called to Sunbelt Rentals in the area of Road 136 and Avenue 64 near Earlimart, for a report of a stolen rental excavator and trailer.
The trailer was later recovered in the 10300 block of South Vineland in Lamont. The excavator was tracked to a property in Kingsburg, where Pedro Coronado, 37, of Lamont was seen loading the stolen excavator onto a trailer attached to a blue and white, 80’s model Ford Dually pickup with a louvered gooseneck-style tailgate. A warrant was issued for Coronado’s arrest.
On April 28, TCSO Ag detectives received information from the Kern County Sheriff’s Office that Coronado may have painted the blue and white Ford dually pickup black.
During this investigation, several additional thefts were reported to  involving a white/blue Ford Dually and a black Ford Dually truck.
On May 1, Kern County deputies found a black 80’s model Ford dually pickup with a louvered tailgate at a property in the 10300 block of South Vineland in Lamont. This property was associated with Pedro Coronado. The pickup was hitched to a dump trailer with a Caterpillar skid steer loader, which were both positively identified as equipment stolen out of Tulare County. Detectives were able to remove a portion of the black paint off the truck to reveal the actual color was white with a blue stripe.
On May 3, Kern County Deputies found and arrested Coronado. He was in possession of a trailer stolen out Tulare and a stolen mobile home out of Kern County. Coronado was transferred to Tulare County and booked at the TCSO South County Detention Facility.
TCSO Ag Detectives continue to work with the Kern and Madera County Sheriff’s Office to identify additional suspects and additional thefts Coronado may be associated with.
Anyone with information regarding this case is encouraged to contact Detective Ryan Pugh or Sergeant Joe England with the Tulare County Sheriff’s Office Agricultural Crimes Unit at (559) 733-6218. Or they can remain anonymous by calling or texting (559) 725-4194 or through email at tcso@tipnow.com.